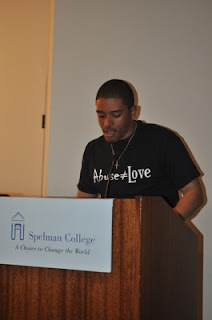 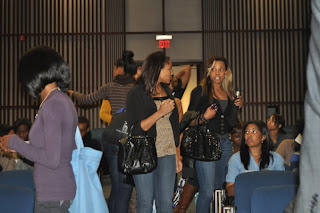 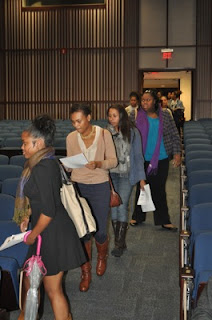 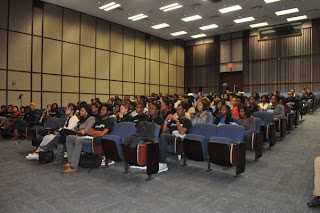 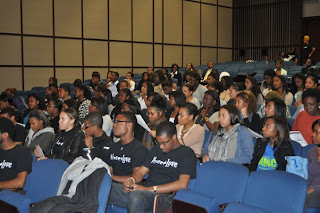 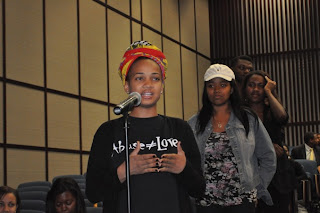 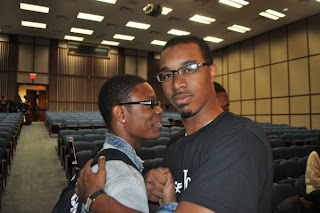 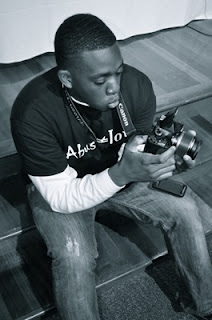 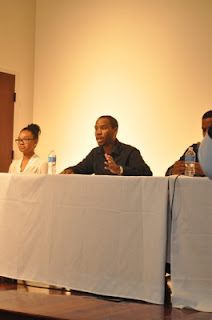 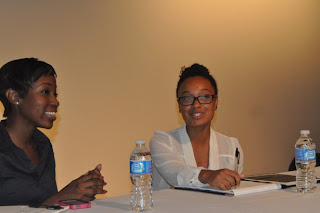 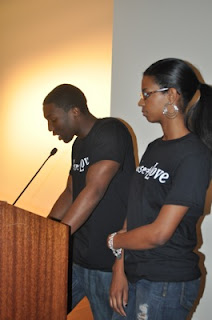 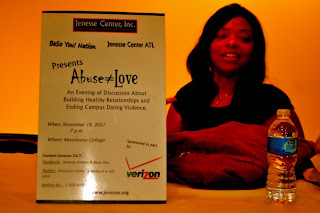 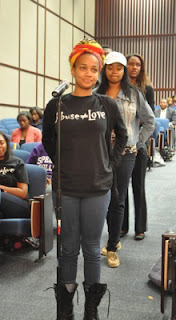 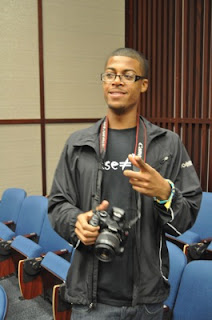 Hundreds of young men and women packed The Cosby Auditorium on the campus of Spelman College in Atlanta, Georgia for Jenesse Center’s first National Youth Conversation this past November. Lead by Jenesse Youth Leader and Morehouse student Aaron Francis and in conjunction with Alpha Phi Alpha Fraternity and Delta Sigma Theta Sorority, The Conversations was an extension of the Los-Angeles based Youth Conversations that were created as forums for youth to discuss ways to end
The forum is part of Jenesse’s youth-based initiative, Abuse ≠ Love which seeks to educate youth on healthy relationships and respect. Topic ranged from the responsibility of men and women when in relationships, the culture of violence in communities, what to you are in an unhealthy relationship and ways to educate friends who are abusive relationships. The panel was made up of student leaders who attended both Spelman and Morehouse Colleges as well as Jenesse Youth Coordinators Jerry Jackson and Angela Parker.
Jenesse ATL is an Atlanta based group formed by Aaron Francis that works in partnership with Jenesse Center to help Atlanta families who are victims of domestic violence and to educate and start a dialogue with Atlanta young adults on healthy relationships.
Posted by Angela N. Parker at 9:18 AM No comments:

Teen Suicide Rate on the Rise

The recent suicide of 17-year-old Dan Behar has once again put a spotlight on teen suicide. And there is one question raised again and again: What is happening among the youth?

"There are lots and lots of questions we will never have answers to," said Richard Lieberman, a psychologist for the Los Angeles Unified School District. "It's complex."

Lieberman was among the founders of the suicide prevention services within the LAUSD nearly 25 years ago. The services began when the number of suicides tripled in the 1980s and became the third leading cause of death for high school kids in the United States.

For youths between the ages of 10 and 24, suicide continues to be the third leading cause of death, according to the federal Centers for Disease Control and Prevention. Nearly 4,400 youths take their lives each year

"It is such a hard topic to talk about and very often parents don't wish to discuss it as a suicide," Lieberman said. "There are no predictors of youth suicide."

Read more here
Posted by Angela N. Parker at 11:38 AM No comments:

Why Are Our Young Women Still Dying? 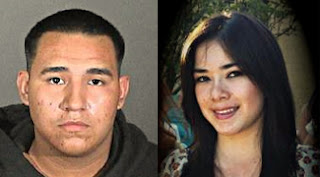 The death of Cindi Santana, 17, at the hands of her ex-boyfriend Abraham Lopez, 18, after a lunchtime argument at Southeast High School has once again brought a spotlight on teen dating violence, but the question is, why do we always have to wait for a young woman to die before we get serious about talking about teen dating violence?

Relationship Violence is a fact of life for too many young girls today. According to statistics provided by Break the Cycle:

Yet, despite these startling statistics, we continue to act like relationship violence belongs in a conversation about anybody else but our young women and men. Too many times it seems that when parents realize their child is in an unhealthy relationship, even if there is no physical violence involved, they just wait for the relationship to flame out, since it's "young love" and just hope that chapter is behind their child. But what about the emotional scars?

In this case, Cindi's family did everything right. They called the police and had him arrested after an earlier threat and altercation, they told the school principal that Cindi was in danger, they did everything they could to keep her safe. It's a bitter pill for us to swallow, but a reminder of the real danger relationship violence victims are in on a daily basis.

Then there are the abusers, both young men and women who clearly need help to deal with their rage. We cannot afford to ignore  the signs of their dangerous behaviours because it can lead them to hurt others or themselves.  Abraham Lopez had to have been troubled for a long time, somebody close to him had to see the signs. Why did none of his family and friends step in and try to get him help before he took Cindi's life? Now let's be clear, nobody is responsible for Abraham's crimes, but Abraham, but we must intervene when we see our loved ones going down a dark path. We must teach our youth that strength is not used for hurting and abuse is not love.

Education is the key in helping break the cycle of violence early, so is conversation. How can a person protect themselves from a potential abuser if they are not educated about what signs to look for? For far too long domestic violence and relationship violence has been a dirty little secret and victims have been unable to seek help because of fear, shame or even the sense of hopelessness. Cindi's death is a tragedy, but if we forget about her after the headlines fade and lose sight of all the other young women and men who are victims of relationship violence, then we will just keep repeating this devastating cycle of "shock and awe" as our daughter and sons continue to die at the hand of those who claim to love them.

Less than two weeks after a student allegedly stabbed his ex-girlfriend to death on a high school campus in South Gate, the Los Angeles Unified board is set to consider expanding teen violence programs districtwide.

The proposal was introduced in August, but is receiving new attention with the arrest of Abraham Lopez, 18, on suspicion of murdering Cindi Santana, 17, after a lunchtime argument at Southeast High School.
Lopez faces up to life in prison with the possibility of parole if tried and convicted. Read more.
Posted by Angela N. Parker at 10:35 AM 2 comments: 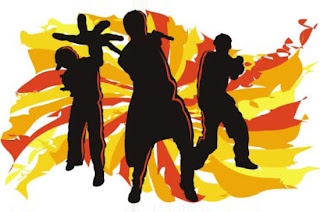 Los Angeles County prosecutors say rapper Tone Loc has pleaded no contest to assault weapon possession and domestic violence charges stemming from an arrest earlier this year.
The rapper, whose real name is Anthony Smith, entered the plea Monday in a Burbank, Calif. courthouse. Smith pleaded no contest to one count each of possession of an assault weapon and corporal injury to a spouse. Read the story here.

Tone Loc isn't the only rapper that has been acussed of domestic violence against their spouse or partner. While the prevelance of domestic violence cannot be blamed on one thing, the question needs to be asked: Is there a realtionship between Hip Hop and Domestic Violence?
Posted by Angela N. Parker at 10:39 AM No comments:


IF He/She Hurts Me I Retaliate so I’m Not Being Abused. We’re Just Fighting: NOT TRUE
Domestic violence is when someone hurts you physically, verbally, mentally, financially, or sexually.

You should never have to defend yourself against someone you love or someone who claims to love you.
He/She is Giving Me A Good Life. I’d be a Fool to Give it Up: NOT TRUE
No life full of pain and fear is a good one, no matter how it may appear to others. You should never have to get used to being abused. You should never suffer in silence over material items when there are places like the Jenesse Center that has everything you need to start a new life.

Domestic Violence Awareness Month and You!

October is Domestic Violence Awareness Month and it's a time for us to think about what we want to give and receive from relationships. Sometimes, we fall into unhealthy patterns with loved ones that don't make us happy, or we continue to make the ones we love unhappy. Each week we will be posting some common myths about realtionships. We don't always know we are being abused, or that we are abusing others, but once we get the facts we can work on how to change things for the better.

Some Common Myths About Relationship Violence


Domestic Violence Can’t Happen to Me: NOT TRUE
Anyone can be a victim of domestic violence no matter your race, age, gender, or social background.
Everybody Has Drama in Their Relationship. It’s Just How Life Is: NOT TRUE
While no relationship is perfect, there are some behaviors that are not acceptable. There is nothing normal about expecting to be belittled and/or brutalized on a daily bases. There is nothing normal about having to wonder if this is the day that one wrong word or misstep costs you your life. You should be able to communicate with the person who you are in a relationship with and you should enjoy a partnership built on trust and respect.
Posted by Angela N. Parker at 9:59 AM No comments: